[Note: This review is largely spoiler-free! No major plot elements are revealed, though I do discuss character arcs and such.]

I love Dungeons and Dragons (RPGs in general) and I love supporting indie publishers, so I was pretty pleased when the opportunity to review The Sleeping Dragon came about via my attendance at Dragonmeet. Published by indie company Wild Jester Press, this book promises a Tolkien-inspired, Pratchett-esque, science-fantasy tale featuring all of your favourite fantasy character archetypes in a delightfully subversive way.

What's it all about?  To give a brief summary:

The five greatest adventurers of the age discover that in five hundred years, the Sleeping Dragon will awake and destroy civilisation.

Many many years later, in a world so transformed by mass-produced magic that it seems heroism itself is rendered obsolete, five misfits find themselves tasked with preventing the plague, war, famine and destruction that the Sleeping Dragon will bring forth. 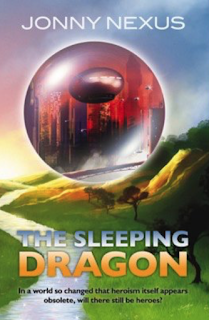 What we have here is a world where magic, or 'mana', has essentially created modern technology. Flying carpets are state-of-the-art vehicles, everyone catches the underground 'worm' to work while staring at their crystal screens and talking on their 'whispers'. Simulated quests are televised as a popular form of entertainment, and the adventurers of old have all but been forgotten.

Nexus builds us a fun and immersive world in which we can get to know our five cynical protagonists: Blade, an AdventureSport warrior past his prime; the Storm, a rock star lutist with a significant drug problem; Dani, an enigmatic con-woman; Darick, a nervous priest and the group's voice of reason; and Presto, a disgraced and disgruntled wizard. This is the group we follow as they attempt to figure out the mystery of the Sleeping Dragon, a sinister... something, which threatens to destroy the world.

The plot is as much about the journey as the destination. It can be frustrating to see the characters hit multiple dead ends, with some scenes, such as one taking place in an AdventureSport arena, being perhaps a little superfluous, but Nexus makes up for this in his worldbuilding and character interactions which drive the first half of the book. Five distinct personalities provides much room to play with and different archetypes to bounce off from. Presto, Blade and the Storm are perhaps the most stand-out, with the most attention given to their emotional arcs. Blade as the sporting celebrity with surprising emotional depth is a good foil to the crackpot, spell-slinging Presto, and their interactions might be some of my favourites from the entire book.

One of the pitfalls of having an ensemble cast, which in this case features the main party and a few later add-ons, means that some characters suffer from less development than others. Everyone's backstory is hinted at to some degree but it really is a shame that we don't get to know the main cast as well as we'd like. Darick in particular suffers from this, and Dani to an extent. However, everyone ultimately gets their own moment to shine, and the ending leaves ample room for further explorations of these characters should Nexus ever decide to write a sequel or spin-off.

The Sleeping Dragon is ultimately a fantasy novel, with elements of science fiction but with a large helping of humour, and this is one of the main selling points of the book. The delivery of humour ranges from verbal sparring to slapstick shenanigans, with the group's adventure taking them to ever more ridiculous heights (often literally) in a whistle-stop tour of the fantasy world Nexus has created. The Pratchett inspiration is apparent throughout, with some great one-liners that genuinely made me laugh. It's both amusing and exasperating watching the core cast struggle to step up to the burden they are shouldered with, but ultimately satisfying to watch them overcome their problems and develop as people.

There's also a strong Dungeons and Dragons influence, with the main five characters being typical components of an adventuring party. With the rapid twists and turns of the plot, it's easy to imagine the events happening on the whim of a Dungeon Master or a dice roll. Reading The Sleeping Dragon is like reading a roleplaying game brought to life. This structure works to the genre's benefit; it's appropriate, a little bit meta, and it keeps the novel interesting. It also really makes you want to pick up the old Dungeon Master's Guide and play some RPGs.

Despite the aforementioned series of dead ends and clue-salvaging which comprise the first half of the book, the pacing soon speeds up with some impressive fight scenes (who doesn't love a good magic duel?) and action which keeps going until more or less the very last page. An outpouring of enemies, alignment changes, reveals and twists are densely packed into the novel's final chapters as the mystery finally comes together.

If you like fantasy, science-fiction, humour, modern takes on classic tropes, roleplaying games or any of the above - check out this book.